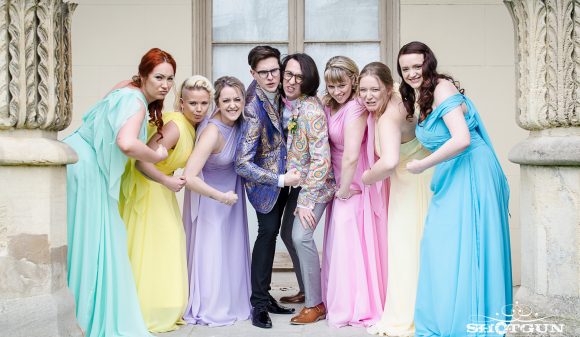 Once upon a time there was a certain BIG GAY WEDDING COMPETITION run by yours truly and GAY TIMES magazine. The entrants had to explain in so many words, why they felt they should win the comp & the winning couple (by a mile) were Morry & Luke; whose comical account of Morry’s failed attempts at proposing to Luke on Valentines day, had us ALL bent over double!

Winning the comp may have been a milestone in their magical journey together, however THIS is where the fairy tale begins…. YES LADIES & GENTLEMEN – I give to you: A DISNEY THEMED WEDDING set in the Palace of the Royal Pavilion Brighton no less! You couldn’t dream it up! Hang on…Oh yes you can……! ! ! Morry & Luke just did! I knew this wedding was going to be off kilter & OFF THE SCALE when I met the ecstatic boys in Brighton, following the discovery they had won the BIGGEST GAY WEDDING COMP OF THE YEAR! Hearing all about their plans & ideas, we visited the suppliers of the comp one by one to discuss what they could do, to make their special day unique in every way. Morry, being the biggest DISNEY fan (he’s got Disney tattoo’s & everything!) firmly set the scene of what he had in mind so we listened and learned & luckily Luke was there to bring him gently back down to earth! No seriously folks, it really helps to have a theme for a wedding, as ideas can spawn from one thing to the next & in Morry’s case his imagination was left to run WILD…. (well to a certain degree!)

So after several trips down to sunny ol’ Brighton the date & details were set & we all got to work in creating the wedding of the boys DREAMS! The day finally came & the excitement of (all six!) maids of honour, getting ready in the same Airbnb as Morry & Luke, was chaotic but electric! Each one themselves a Disney Princess in every colour of the rainbow; a real life fantasy as we witnessed our winning couples dream, coming to life before our very eyes! In true Disney style the boys were whisked off to the ceremony in a fictional pumpkin, transformed by their fairy godmother into a coach pulled by four wild white horses no less!…(oops think I’m the one getting carried away here…) only to arrive to be greeted by their wonderful family & friends, in the historical Red room at The Brighton Royal Pavilion!

It was here that celebrant Sam Goodchild of Infinite Love conducted the most touching / emotional ceremony you can imagine, leaving no dry eye’ in the house… trust me I could barely focus by the end, such was their story of love, heartbreak, tragedy, heartbreak (again!) on an epic scale…. but as with all good fairy tales, LOVE conquers ALL! Aaaaah!!! To explain: Each groom represented by a different coloured sand in a glass container, poured their sand into a central vase representing their marriage, to symbolize how each individual brings something unique and special to the relationship. Together they created something new and wonderful, a blend of colours, talents and strengths.

Once the sands are blended together in this ritual, they can never be separated, as each grain of sand brings to the mixture a lasting beauty that forever enriches the combination. How cool is that??! Then came the Love letters box –

In a step away from tradition Luke and Morry chose to include a love letter ceremony. Prior to the ceremony they wrote love letters to each other. In these letters were heartfelt words describing their feelings, aspirations for the future and reasons why they chose to marry. These letters were sealed before they each could read what the other wrote. During the ceremony the letters were placed in a box with a bottle of wine and the box was sealed. The idea is that if ever they find their marriage has hit a rough spot, they will bring out the box, open it, drink the wine and read the letters reminding them of the love that brought them together. Following this unique ceremony the boys along with their bridesmaids headed to the Music room for portraits, the most spectacular & enchanting space within the Royal Pavilion itself. An explosion of colour & opulence, this room is a feast for the eyes with huge hanging chandeliers & gold gilded artefacts just dripping from the walls, ceilings & fireplace. It is 17th century psychedelia (before the word even existed!) drawing on art influences from China, India and beyond. It has to be seen to be believed & even then, trust me you won’t believe it! There really is no other Palace I love to shoot in than The Royal Pavilion itself, where history & style intertwine among the former Prince Regents love for all things OTT, colourful & lively (he was known to throw the BEST parties!) which seemed fitting on this day of love & unadulterated celebration.
To mark the end of our time at the Palace, the boys were treated to a beautiful Dove release by Lamberts Dove’s, signifying this special moment in their lives in letting go of the old & welcoming in the new! The doves soured over the Palace spires, circling the grounds before heading off home 10 miles away for tea! However before we left the stunning Pavilion we bounced around the grounds like Royalty, capturing some EPIC shots to mark this once-in-a-lifetime-day day… & when in Brighton who wouldn’t want to visit the bandstand? Another perfect example of Regency architecture just oozing class & style! So following the ‘classy’ shots we took off in the Shotgun mobile to the Palace Pier; another icon of Regency Brighton but this time representing all things seasidey / cheap & dare I say it ‘tacky?” But hey who am I to judge? I have to admit to loving a bit of candy floss & cheesy chips in a cone, even just to throw at the seagulls! Oh Brighton we do love thee!… So I eventually extracted the happy couple from our joyous joint, cos’ hey we had a raucous party to reach….! & Raucous it was with a capital RRrrrrrrrr! Yes our gorgeous boys descended the steps of The Proud Brighton Ballroom to raptuous applause, stepping into their Disney themed reception like Prince Florian & Prince Charming. Each table decorated with the most glorious flowers & Disney centrepiece’s, all created by the incredible Barbara at Miss Mole’s Flower Emporium. & not forgetting the cake! Oh the cake….! Beautifully fashioned into a replica of the Royal Pavilion itself, Carol @ Cakes beyond belief‘ created nothing short of a masterpiece & is actually the last one she will EVER make! What another poignant moment in history! It should be obvious by now these boys do EVERYTHING in style & the reception proved to be nothing less than an example of how to put on an ‘EPIC’ wedding day! Our newly weds & their guests were treated to a cabaret & burlesque show like no other, from the incredible performers of The Proud Brighton Ballroom, including Dolly Rocket (compare) Cherry Shakewell, Chi Chi Revolver & Dave the bear! The excitement & entertainment continued into the wee hours but not before our Mr & Mr & their guests had made proper use of the infamous Shotgun Photo booth! Yes we all love a photo booth & to say the guests got stuck right in, creating some masterpieces of their own (is a TOTAL understatement!) …. So I finally left the WEDDING OF THE YEAR in FULL party mode, but couldn’t help but notice the beautiful carriage sat outside with four wild white horses, just waiting to whisk our happy couple away, from their most perfect BIG GAY WEDDING day … made even more real by their Fairy God mother in drag, outside chuffing a fag!

Ladies & gentlemen .. THIS is what REAL fairy tales are made of….! Check out the full gallery of Morry & Luke’s BIG GAY wedding day below!