And the Winner of Big Gay Wedding Day Comp is??? ! 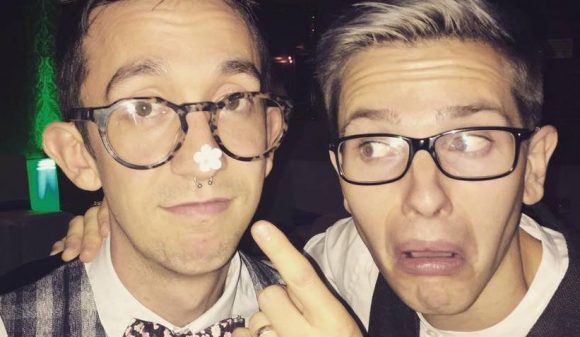 Thank you to all the wonderful couples who entered, it was an extremely difficult choice but we are very happy with the result & wish Morry & Luke a truly wonderful day! Watch this space for updates on the couple as they plan their Big Gay Wedding day !

We recently partnered with Gay Times to provide one lucky couple the chance to win a dream wedding worth £20,000. We’re thrilled to announce that Morry Attridge and Luke Davies from Basingstoke have won the competition. Excerpt from last weeks Gay Times post below:

If you read their story and don’t believe in the power of love, you’re dead:

“We first met when I was working at a club in Bristol and ended up friending each other on Facebook. We didn’t actually speak for about 5 years and after moving back home, I got a message from Luke saying that he was living in Newbury and we should meet up for coffee. After meeting up and finding out more about each other we had our first official date. We instantly clicked as we got on really well together. After a while I opened up to Luke about how my life had taken a bit of a rough turn. Luke helped me through that tough time in my life, giving me the confidence to go back to University and get a degree to pursue a career in Education. I knew he was the one from our first coffee date. I can’t imagine my life without him.

“I proposed to Luke on Valentines day 2015. A little cliche, I know! I pretended I had forgotten to get him anything and I asked him to go to the shop to cook us a three course meal, much to his dismay. Whilst he was out I locked all the doors and covered the entire house in tea lights and rose petals, ran him a hot bath and placed his favourite treats out. First cock-up of the evening, he was back before I could finish decorating. I had to lock him outside the front door for twenty minutes while I finished setting up!

“He got over being locked out when he saw what I’d done to the place and the romantic bath. However, I was so nervous that I rushed him out of it after ten minutes! Second cock-up. Luke was a little annoyed, but I hardly noticed as I was too nervous to focus. When I did propose, he had no idea I was even asking him. It took him a little time to realise that I was proposing. After the shock wore off he immediately said yes! I was so relieved. I didn’t have a ring at the time, but I gave him a ring made of twine as an engagement ring. The final cock-up of the evening!

“After much hugging and kissing we then had a bit of a panic about the bare candles all over the house. The whole evening ended up with a mad rush to put the candles out and Luke stepped in several candles, covering his entire foot in wax. Luke also blew out the candles all over the white bathroom walls and mirror. It was a comedy of errors and a complete farce, but Luke says it was completely me and he wouldn’t have wanted it any other way! Most importantly though, he said yes.

“Winning this chance to get married would mean the world to us, as we have been unable to make any plans due to our financial circumstances and the costs involved, although we have agreed on one thing; acrobats. Yes we both want acrobats at the reception!

“This opportunity would not only allow us a chance to have the wedding of our dreams, but to embrace the equality that LGBT+ people in this country have campaigned for. Also, we both feel it is important to be positive role models to the students we teach, by being open about our engagement and our equal rights to marry.”

Congratulations, Morry and Luke! We’ll keep an eye out for our invite!