Thinking of Proposing… Talk to The Proposers 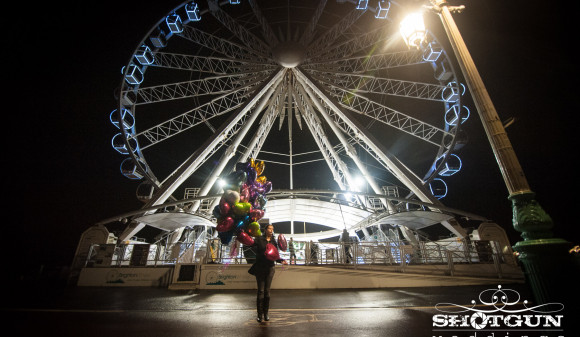 Thinking of Proposing? Talk to The Proposers. So I had the pleasure last week of working with ‘The Proposers’ ~ an Events company with a difference! Based in London the proposal company set up amazing proposals & romantic gestures for guys & gals who want to make a big deal out of popping the question or delcaring their love to that special someone in their lives..! Their set ups are plainly AWE INSPIRING & they have been featured Nationwide in The Press for the genius and imaginative ways to pop that question. The idea is so novel in fact that they even have their own TV show on Lifetime TV with real life actual proposals and the work that has gone into creating them.

The set up I was asked to photograph last week involved a random balloon seller stationed at the foot of Brighton’s big wheel with 100 personalised balloons, declaring one boys love for his girl! The plan was that he would walk with her along the seafront to the Big wheel where they would ‘stumble’ across the balloon seller and the penny / surprise would drop when his girl noticed that ALL the balloons were created for her! SOOO Romantic & proof that Romance is clearly NOT dead! What a lucky girl!!!

So there we were after collecting over 100 foil balloons, each personalised with ‘Vieira loves Diana’ and battling against the wind, all for a great cause …FOR LOVE! I hid behind a parked car and the resulting images relay the story better than words! A truly romantic gesture in a magical place in front of the lights of the Big Brighton wheel, what a star boyfriend!

The Proposers… ‘We guarantee every detail except a yes!’

Check out their wicked site: http://www.theproposers.co.uk