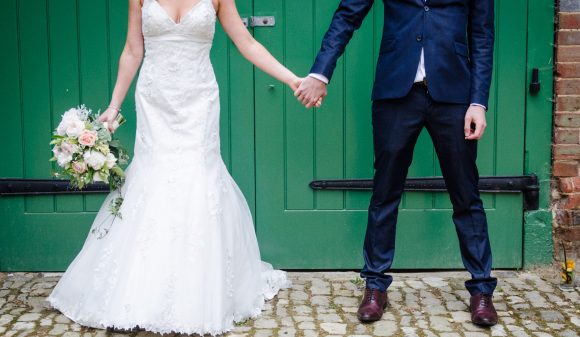 One of the most stylish weddings I have EVER shot (& there’s been quite a few!) has to be that of Lauren & Fred.
Lauren wed Fred (who happens to be the lead singer in a cool as f*$k band) at Bignor Park.

The beautiful bride looked like something out of a pre-raphaelite painting, a latter day Desmerelda crowned by a corsage of flowers in her hair with a boho style fishtailed wedding dress, which tipped the scales of the knock-out kilter and left Fred speechless at the altar! The man himself looked sharp as nails, as he came riding in on his white horse, blinding us in his shining attire!… (OK well the horse didn’t actually appear but you get the picture!) There was nothing in the slightest way mainstream about this couples day, as it oozed a sense of individuality and style at every turn (just how I like it!) With the stunning Bignor park and their period Manor house as a backdrop, you really couldn’t take a bad picture! …(well maybe a crap photographer could but me? haha hell no !) note to oneself: Ego kilter has hit RED!

Following their heartfelt ceremony which took place in the stunning gardens of Bignor, we embarked on a magical jaunt through the wild landscape that faced us, capturing masterpiece upon masterpiece as we went!

Trust me I really cannot create beautiful images entirely on my own, it HAS to be teamwork, which starts with having a great relationship with my couple and that is just what took place on our EPIC shoot! Besides these two love birds being an artistic feast for the eyes reminiscent of a Rosetti or Waterhouse painting, you wouldn’t be surprised if you stumbled upon them in Vogue or Tatler… dream looks for a dream wedding which still seems like a hazy dream at this point! To end the day in the most touching / rock n roll way possible, Fred sang and played his guitar to his bride straight from the heart and there wasn’t a dry eye in sight!

They say your wedding goes by in a flash but this day to me was more of a dream, one purely made from fairy-tales and fantasies from dusty old novels metamorphosized into reality. They say many things but who says romance is dead… eh?? !