Guy makes an honest woman of a Supergalactic Sinead! 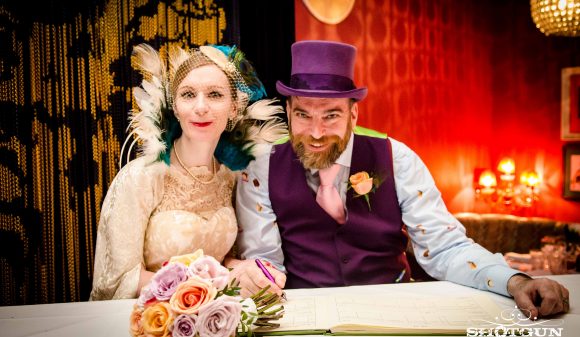 Guy makes an honest woman of a Supergalactic Sinead!

I don’t do Mainstream Wedding fairs… you know the organised / packaged / off the shelf variety… turning the cogs of the same old wedding-dream-machine, reeling you in at the very start of your ‘I do’s’! Walking the aisles as a couple faced with hoards of wedding vendors desperate for business, must be a frightening prospect; trying their best to avoid eye contact, secretly wishing they had never made the trip in the first place!

Firmly residing at the top of my list of how NOT to meet my clients, I personally prefer a more organic approach to ‘finding’ my couples, rather than the speed-dating-mainstream-wedding-fair-of-the-year version.  It wasn’t ‘exactly’ how I found Guy & Sinead but…

Well OK it WAS at a wedding fair, but it was at QQW (The Queer, Quaint, Weird Fair – ahem seriously!) a completely different kettle, brewing a very different type of tea… in all its wonderous, off-the-wall entirety!

I’m guessing Guy & Sinead were after something a little ‘different’ from a photographer because they in themselves are … well you’ll see…                 ..we had a chat, they looked at my work, then booked me on the spot.

I changed my mind that day about wedding fairs and swore I would never be sucked into the re-hashed-dry-iced-cup-cake-wedding-scene again..    I am so glad I decided to look elsewhere for the perfect couple, as there is clearly NO WAY I would have found Guy & Sinead having coffee at The Ramada; cos’ lets face it, the beans they serve in that place …just ain’t real!

So fast forward to Guy & Sinead’s day.. such a unique / quirky & ridiculously out of the ordinary two-some, would think carefully about who will host the best day of their lives and what better venue than Proud Brighton Ballroom to do this honour justice? Despite the fact this venue has no windows & at best ‘moody lighting,’ it fit this couple like MJ’s odd sparkly, sequinned glove – a match made in err Brighton ….(via neverneverland of course!)

I had a hunch this wedding was going to be something special when I pulled up outside ‘See Saw Sea’ for Sinead’s bridal portraits … a surreal find in Kemp town with an extraordinary interior, celebrating sex and freedom with black ceilings, spot lighting, artistic mirrors and beautiful art adorning the walls. Such a lavish, luxurious love nest; not forgetting the leather chaise longue.. my kind of hideaway! I would like to say there was a defined theme to Guy & Sinead’s day, but in truth, their theme was unashamedly themselves… beautifully encapsulated in all aspects and detail, oozing everything this couple are about … real, surreal , stylishly odd & just a little off kilter… but did it work?! 100% YES.

The couple I am told were aiming for a magical, fantastical theme and both being avid film lovers, performance, flamboyance, and costume were positioned high on their casting list.

Guy, dressed like a fictional character from a latter day Alice in Wonderland, greeted his wicked step-mother / Ice-queen wife to be (Sineads description not mine) to the sounds of Star Wars Darth Vader’s leitmotif, “The Imperial March.” Sinead disclosed she was aiming for a grown-up “imperious queen” as a twist on the fairy tale princess, which she achieved in every fine aspect.

Her outfit and entrance was inspired by Star Wars, Maleficent, Narnia, Wizard of Oz, the Golden Compass and Alexander McQueen. Her gold cape was lovingly made by a close friend, Rachaell, with a magnificent collar fashioned from blue and white peacock, as well ostrich, goose and rooster feathers.

Yes in an odd way we seemed to go back to the future, as time seemingly stood still for a brief moment (for Guy) watching his beautiful Queen bride walk forward to greet him. They were wed to the delight of a vibrant & stylish congregation by their close friend Alix, a celebrant in R2D2 heels and even the stars behind the glamorous on stage black curtain seemed to shine more brightly than anyone who had stepped on this stage before … (I know cos I saw them twinkling…!) Following the touching nuptials I whisked the happy couple away for a fun, spontaneous portrait shoot/jaunt across Kemp town, stopping at every opportunity to take some EPIC shots of the new fascinating Mr & Mrs in all their finery and regalia!

Did I mention it was Pride weekend? No? Well the street parties were in full swing as the newly weds sauntered by, encapsulating the whole festival of pride, love and freedom between them, leaving nothing but trails of moonbeams & stardust as they walked. The evening celebrations did not dissappoint and following a sumptious meal sprinkled intermitently with heartfelt presentations & powerpoints, we were treated to cabaret performances like never before… famed acrobats, a glow-in-the dark hula hoopist, seductive striptease & the legend that is Dolly Rocket (I mean.. its your wedding.. so who ELSE but Dolly??)

Birds featured heavily in the couples theme, with table names of Peacock, Raven and Hummingbird, as well as the more traditional Brighton birds of Seagull and Starling.

Guy & Sinead even went to the trouble of having a beautiful bird mural in rainbow colours painted on the gable wall to their house, to mark the occasion of their wedding on that special weekend.

Amongst the entertainment, burlesque performer Miss Jolie Papillon performed her “Peacock Latino” routine. Dolly Rocket was also resplendent in beautiful plumage, Chichi Revolver performed her hooping act (with baby due – an incredible feat in itself!) and acrobat Michael Standen, all put on a show to be remembered. The entertainment never ceased and along with all the fun & frolics of the Shotgun Slo-mo Booth and musicians Tom Phelan and Glen Richardson, the highlight of the evening was the Iron Boot scrapers who hit the stage for entertaining shenanigans of another sort…. singing all your favourite 70’s-90’s faves in a knee’s-up-mother-brown fashion, accompanied by some big ol’ brass (instruments!) confirming them as THE legendary Brighton wedding band, you would absolutely want for your own wedding! Then before we knew it, the lights were on, the music had ended, the champagne had run dry & the floor got kind of slippy…(as sadly these things do).. & one perfect day came to an abrupt end….  (for us) …but the happy couple were more than just Guy & Sinead, the happy couple were Hero’s … (playing out their own beautiful unique fantasies) ………    just for 1 day… Thank you Guy & Sinead for allowing me the absolute honour & privilege of capturing your VERY special day!

With very special thanks to: