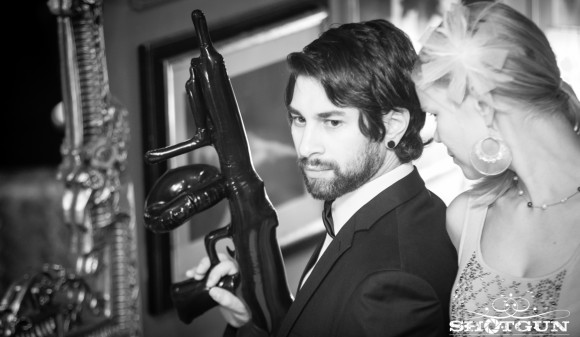 Holly & Liza’s wedding was one of the maddest, baddest, raddest events I’ve ever attended, much less been allowed to photograph! In my job as a Brighton wedding photographer, I meet and shoot some really diverse and beautifully creative, eccentric people. But this gangster themed wedding takes the absolute biscuited cheesecake! Holly & Liza met in the Middle East while working in the medical field. Holly is a UK nurse, and Liza is a US paramedic, and after their wedding they plan to return to Saudi Arabia, the hot capital of hotness. However, for their wedding, they came here, to Brighton, the hot GAY capital of hotness! (Sorry San Francisco, Brighton has had you beat for decades!) Ironically, Brighton never had much of a Gangster era, as they never had Prohibition. So, this is perhaps the largest gathering of Gangsters in Brighton’s history! Brighton is actually a very popular gay elopement city, as the population in Brighton here has been warm, friendly, accepting, free-thinking, open-minded and cosmopolitan for as long as anybody can remember. (Also, no prohibition–of any kind… No inhibitions, either!)

They flew their guests in from all over the world: The North of England & North America, and proceeded to celebrate like only Brighton can!

The wedding day began at The Grand Hotel, Brighton’s most Upper class establishment. (Think “High Tea” like the Ritz in London, only a bit less stuffy.) We had plenty of time to spend capturing great couple shots, candids, and a variety of very sweet moments that would have never been available in the short time traditionally allowed between group shots and dinner. The ceremony was held at Brighton’s The Proud Cabaret Ballroom, a storied, Edwardian building, steeped in over 200 years of Brighton history, including Burlesque and Cabaret shows.

The 1930’s Gangster/Flapper/Prohibition theme tied in perfectly with the Ballroom. And I’m not sure how they phrased their invitations, but literally, every. single. guest. came in full 30’s American mobster regalia. I think I even spotted a few GAYngsters in the bunch!

Following the ceremony, the whole crew travelled en masse to a raucous drinks reception at the legendary Thomas Kemp pub in Kemp Town/Brighton. These wedding guests were both photogenic AND willing, and with their brilliant costumes, it was like photographing the set of Bugsy Malone! Which reminds me- do you remember the film? “My name is Talulah…” That brings us to the next act!

We all stampeded back to the Ballroom for dinner and evening shenanigans, which included Cabaret acts performed by the inimitable Chi Chi Revolver & her glowing hula hoops, Coco Deville the stripper of indeterminate gender, and Dolly Rocket, who, much like Dolly Parton, has an extremely large set of…vocal cords. And a boa. She was amazing. And then came the slideshow of embarrassing child photos! Apparently, Liza’s early aspirations were to set world records as a speed skater amongst other things… Holly, on the other hand, is a part-time House DJ, so she set the mood for much of the evening. Not sure how this hobby works out in Saudi – could put her under house arrest… But whatever, her beats were sick, and she’s totally GAYngster. The Photo Booth AND our Slo-Mo Booth were both a huge hit with the guests! Both went down a storm and I have never before had the privilege of working with a more raucous, rowdy, fun-loving, down-for-whatever group. Everyone played a role and as the drinks flowed, the characters revealed themselves more and more! BEST wedding EVER! (Well since the last wedding anyhow, and until the next, of course.)
Enjoy! (Did I mention GAYngster? Yes, this wedding was totally GAYngster.)