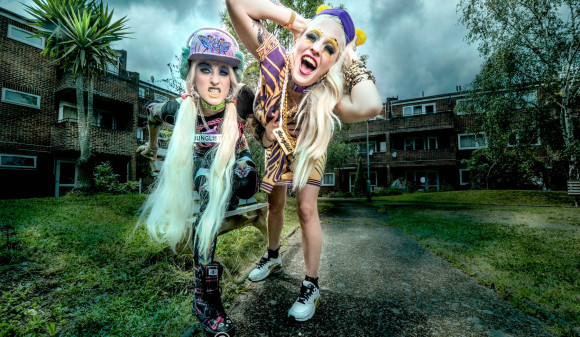 Here is another taste of my creative work and my interest in ‘Anti-Fashion’ as a Photographic genre, which is a term I coined myself after deciding that I don’t like the majority of high-end fashion images that are published in blogs and magazines. I like to work with Artists I personally connect with and I got to do just that when Nixi Killick was in town recently.

Following on from my ‘Red Treds’ series of images (which I put together for my Final Major Project Photography Degree – have a peek at the earlier post) I was lucky enough to work with my favourite BAD ASS BASS Sisters’ ‘My Bad Sister’ on their home turf in Deptford, East London. They called me up as they discovered the ‘seriously up & coming’ Designer Nixi Killick from Melbourne was in town, with her Truly Magical, Kaleidoscopic Creations and Over-the-Rainbow Garms.

On the day the hair and make-up took AGES (as it usually does!) so in the end this meant that we had literally twenty minutes with Nixi before she turned round and spun off to her next meeting, she was THAT in DEMAND!

So we decided to ‘Anti-Fashion-it-up’ in a truly edgy / underground way and shoot a series of images the viewer just wouldn’t expect from a typical ‘High-Fashion-Scenario-Set-up… Cos’ personally I get UTTERLY BORED SENSELESS looking at generic Fashion shoots which lets face it, portray models as coat hangers… So my idea for this shoot was for MBS to get into a fight (which incidentally being twins is something they do often) just not on THIS scale, meaning hair extensions usually remain firmly in place!

So here are the final images ~ ENJOY!